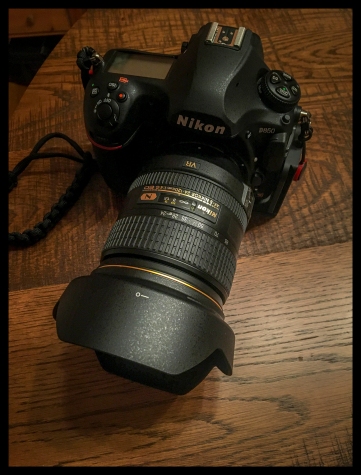 I shot with this lens for almost 2 years and always loved the images that it produced. Unfortunately I always had an internal battle with this lens because it was viewed by “some lens

reviewers/photographers” as a “kit lens” when Nikon began packaging it with their full frame cameras. Back then I allowed those “lens reviewers” to influence me a bit too much because I thought “how can I be taken seriously as a photographer when I use a kit lens instead of my Nikon 24-70 f/2.8?”, so I ended up selling the 24-120 and sticking with the 24-70.

Fast forward to 2020… I, as I suspect most photographers do along their creative journey, began to demand more from myself and my images as a photographer. I got bored with looking at the “same old type of images” I was taking with my zooms, so I upgraded my prime lens collection and began to use them exclusively for a while on my photo treks. The issues I was having with my primes was that I was getting frustrated with changing lenses so often when I was locked in a tight spot and saw something that I wanted to go from wide to tele or vice versa. Add to that, I also had to be constantly changing filter ring adapters with each lens change. Don’t get me wrong, no zoom lens beats a prime for sharpness or clarity and I really love my primes, but I have realized that when I am out and about (especially someplace new) I love the freedom a zoom offers.

So with all of that being said, my wife and I have begun planning a “little” photography trip for next year and I decided that I needed to add a lens with a little more versatility than the 24-70 and my primes offered, which is why I brought back the 24-120. I have realized that “a photographer should not be judged on what equipment they capture their images with, but rather it is the images that the photographer captures that they should be judged upon”.

I am still demanding of good image quality, and the 24-120 f4 is good enough for me and the way I shoot for most situations. I will be including a couple of primes in my bag on that trip which will allow me to stretch my creative wings for any situation that I may encounter.

Early on when I decided to get back into landscape photography I had learned of the saying “f8 and be there” which Galen Rowell used to say when asked about how he got such amazing images.  I later learned that saying was made famous in the 1940’s by street photographer Arthur Fellig.

What the quote means is this…

“Simplicitiy in the technical is equal to being present and prepared. No complicated photographic technique here: just a basic setting (f/8) with enough depth of field for most subjects. And then “being there” in the right place, right time, tuned in to your surroundings, ready to shoot the perfect moment when it unfolds in front of your lens”         — Rich Underwood.

Every morning I wake and am dragging butt on trying to decide “IF I FEEL UP TO GETTING OUT AND SHOOTING SOME IMAGES” I think about this quote, and every morning I get out the tablet and look at one of those “sunrise apps” to motivate me in either direction of motivation I think of this quote. This quote is my kick in the butt to remind me that not EVERY good landscape needs to have an amazing sunrise in it. You just need to “get out and be there” and be ready IF AND WHEN that moment happens, because if you are inside trying to decide you’ll never have a chance at “that moment”.

**Photographer note about the above image; I use a free website called SunsetWX, and I find it pretty accurate. This mornings “prediction” was neutral. I decided to grab the camera and head out for a short drive and came across this scene. Just a hint of color in the sky was all I needed to add to the mist in the foreground. If I had just relied on the app I wouldn’t have gone out with the camera.

Welcome to my new page. After much consideration I have decided to delete all of my older content from this site and start fresh. I suppose this is version 2.0 of me, an older and hopefully wiser version.

My bright idea for this site here in 2020 is for this to be a place for me to share my photography thoughts and ideas because photography is my passion as I am a creative, and that need to create is a core part of who I am. I also have realized that the younger me who had energy for days to go hiking endlessly up mountains paths with 20 pounds of equipment hanging off of my back are done due to my arthritis. That is okay though because it makes me appreciate what I can get to a whole lot more. So this is version 2.0 of me is still going to be traveling and shooting a ton, but with more thought and focus behind the lens.

Thanks for taking the time to read this…now lets grab our bag and head out and shoot some shots! 😉